The images of riots, broken windows, tear gas and police repression spoke of unprecedented political violence on the streets. The social uprising also brought a fire burning the central myths of the Slovenian story of successful transition from the socialist past.

Behind the mirage of the brand new world, neoliberalism with a European face has finally shown its most real and brutal shape. The fairy tale of the free market society and of fair elections in the legal state supposed to guard young democracy, has been drowned in once tasty “Cabernet Slovignon.”

In the weeks of December 2012 tens of thousands people hit the streets, occupying central squares and chanting now famous political slogans: “It is enough!” “It is over with them, they are done! [Gotov je, Gotovi so!]” “They are all crooks!” “We give the Parliament, but not the street!”

The political condemnation of the corrupt political class received material confirmation in the report of the public Committee Against Corruption, which found strong evidence implicating both major figures of the Slovenian political arena, Janez Janša (Prime Minister and president of right-wing Slovenian Democrats) and Zoran Janković (mayor of Ljubljana and president of major centre-Party Positive Slovenia) in major corruption scandals.

Instead of taking full responsibility and resigning, they and many others continue their illegitimate political mandates. The corruption report brought additional fuel to the fire, and even radicalized the demands of the social movement. The initial moral critique of the corrupt state officials shifted to a critique of the political class and the system as a whole. Protesters have recognized that something is rotten in the state of Slovenia, and the leading puppets are only the most visible symptoms of a deeper underlying and structural crisis of capitalism.

Off the Couch, into the Streets 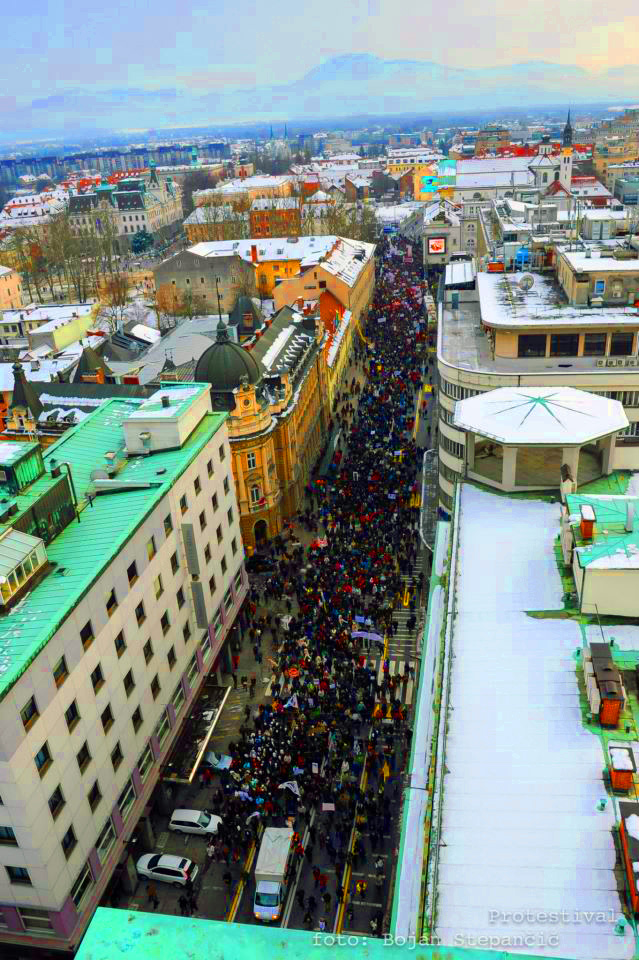 The last three months of mass protest have brought together many different social groups and individuals of different political affiliations and generations, young and old, workers and students, queers and precarious, ecologists, anarchists and socialists. All are demanding a deeper social change. The “all-Slovenian uprising” gave birth to the new sense of solidarity. Instead of the usual complaining from the couch, people stepped into the realm of public protest.

It would be wrong to immediately relate the “people” that compose the movement to some previous ideal or truer Slovenian nation. On the contrary, the “people’s” movement is complex and riven with splits and ambivalences. If the common cause is clear, namely, the overthrow of the political class, it has to be stated that the paths and goals of the new political project are less defined.  This conflictual moment opens political space outside the pragmatic and established rules of the official political process. Thus, we are witness to diverse perspectives that range from moralism (the conservative liberal stance that “we need new good people and the real legal state”), to nationalism (“protest for a better Slovenia”), to an even stronger radical tendency in support of social transformation.

People are struggling under dismal social conditions in the new Slovenia, and many groups have been working to formulate socio-economic alternatives to the existing order. Aspirations that used to be unthinkable only few months ago, such as demands for direct democracy and democratic socialism, have come to the centre of mainstream public media.

The popular political agenda is no longer defined and molded by existing institutions or parties. It is now also being shaped by  people on the streets, in numerous public performances, cultural events and political discussions of new popular councils, committees, and initiatives that take extremely seriously the search for the broadest possible democratic platform. These include the Committee for Direct Democracy, the Coordinating Committee for Cultural Slovenia, the General Assembly of all-Slovenian Uprising, and the Committee for Justice and Solidarity in Society. There are also other already existing cultural and political groups that have called for engagement in civil disobedience and protests against the current regime: university trade unions, the student organization Iskra, Workers-Punks University, the Federation of Anarchist Organizing, and many others.

Protests and discussions strengthen and expand the politics beyond representative democracy and its defunct policies. Many weeklies (the section Revolt in Sobotna Priloga, Dnevnik, Mladina, etc.) and also daily newspapers have started publishing more alternative contributions for the first time.

People in Slovenia have found the official political class guilty not only of misrepresentation, but also of attacking what remains of the welfare state , basically begging for foreign intervention. To be more precise, both the present right-wing government (Janez Janša) and the previous center-left government (current president Borut Pahor) have both participated in the imposition of the worst possible austerity programs.

These were recently even criticized by same International Monetary Fund that promotes austerity, and launched horrendous policies across the European periphery in the first place. They have included: privatization of banks (even manipulating a public referendum on setting up a “bad bank” to handle defaulted loans); imposition of special “holding”-“expert” institutions that would sell all domestic capital to the foreign investment firms ; massive layoffs and dissolution of  collective bargaining agreements in all social sectors; and drastic cuts in the social budget (for example, the budget for research and universities fell from 10-20%; cuts in the field of culture are in some fields as high as 50%; endangered groups of pensioners receive merely 250 Euros or just over $300 CAD per month).

Austerity, in short, is  financial discipline sanctioning unprecedented exploitation of labour. It is intended to ease the re-investment of capital in crisis. It comes as no surprise, then, that in the time of ever more severe economic crisis the heaviest burden is falls on ordinary people. Slovenia registers ever-higher unemployment (12-13% by Eurostat or higher) and has witnessed the most drastic rise of the youth unemployment in Europe, which went from 15% to 25% in last months of 2012.

For over two decades the political class of Slovenia has been congratulating itself for undertaking the most successful transition to a market economy. But the success story of the “Switzerland of the Balkans” has fallen apart like a paper-house. The mythical figures and actions of Slovenian independence have been stripped naked. Even people who”fought” for democratic transformations of the crippled Yugoslav state in late 1980s have finally seen the great robbery: the dispossession of social wealth both by local tycoons and foreign capital; gradual dismantling of the welfare state; social exclusion of underprivileged and vulnerable social groups.

Waking up from the Slovenian dream came late. However, it seems that even those living in the deep apathy of recent years have become political, organizing, discussing, meeting and creating. The movement has already had successes: the mayor of Maribor, Franc Kangler, resigned due to the pressure of public protest, and three coalition partners from the current government stepped down.

All this is happening not in a situation of abundance and free time, but on the contrary during the winter months when people struggle not only to pay their bills but also to find enough food to survive. At a time when the number of people demanding food stamps and charity is at an all-time high and evictions are common, the situation is ready to explode into clear alternatives: social disaster or social transformation, barbarism or socialism.

Obviously, the path and the process of the future uprising cannot be anticipated. As mentioned above, there remain many conflicting strategies at play in the movement. Even if they all agree on the overthrow of political class, there are some that want  a gradual reform of the system (60% of all interviewed from the established Slovenian Public Opinion) and others who see revolution as legitimate (30% of those interviewed). Some currents insist on strengthening direct democracy and popular institutions, taking lessons from Iceland. Others want to launch a project similar to Greece’s Syriza, to establish a real left-wing party that would emerge from today’s social movements and develop a long-term strategy. These diverse perspectives bring conflict into the core of the uprising, paradoxically making it stronger. Through constant debate and struggle the movement is experimenting with different political forms and gaining in political strength.

Also, importantly, in recent times the role of trade unions, especially in the public sector (SVIZ), has been radicalized. January 23 saw a massive general strike and 20 000 workers on the streets of 14 different cities across Slovenia. They have joined the struggles of the social uprising. What was fragmented and divided before has become more articulate and united today.

The insistent and powerful social movement that is connected with progressive political forms has become worst nightmare of the ruling class. This is why the government responded without arguments, but with repression. Out of the fear of its own decay and burial, it launched a series of repressive measures. The list is long: criminalizing the Committee Against Corruption, spreading fear among protesters by imposing fines for alleged organizers and participants of the protests, telling public servants not to join protests, criticizing media for their independent reports, manipulating the public in all the media, and massively recruiting for the security services.

The newest measure was implemented on February 8, the Day of Culture in Slovenia, when the third “all-Slovenian Uprising” took place in Ljubljana. What remained of the government, Catholic Church and their civil society organ “Assembly for Republic” decided to organize a street protest on the same day and time. The Party of Slovene Democrats headed by PM Janez Janša demanded that their members participate in a pro-government rally under threat of expulsion from the party.

However, the anti-government, anti-corruption and anti-crisis protests showed their political maturity by meeting hours later in the same day. The images from the two protests could not have been more different. The pro-government rally saw  a few thousand aging “supporters” with a mass of Slovenian flags and ultra-nationalist slogans listening to Janez Janša speaking from the Brussels EU budget summit about the threat of “left fascism” in Slovenia. A few hours later, one of the most massive protests in Slovenian history took place: around 25 000 people marched through the streets with impressive cultural performances, raising the demand for “the spring to come, and Janša and the political class to leave” once and for all. Against their rulers’ weapons of mass destruction and repression, the uprising responded with weapons of mass creation.

Let me conclude with the last strophes of the anthem of uprising written by Ksenija Jus, and sung by the self-managed women’s choir Kombinat – “The Song of Resistance”:

The battles of the brave-hearted people,/ are not forgotten stories of bygone days./ For them our poem should live on,/ For them we raise our fists to the sun.

The Song of Resistance seems to have awakened another ghost of the past that was forgotten in 20th century. Shouldn’t we again be allowed to dream and think of revolution? Even if still very young, the uprising seems to have survived more than one winter, and it is likely here to stay for much longer.

Gal Kirn currently lives in Berlin but in his hometown of Ljubljana he participates in the Workers-Punks’ University. He co-edited the book Encountering Althusser (Bloomsbury, 2013) and Surfing the Black,Transgressive Moments in Yugoslav Cinema (Jan van Eyck Academie, 2012), and edited the publication Post-Fordism and its Discontents (JvE Academie, 2010).