The existing Electoral Law states that the candidate for the most votes for President will become the next President. The oligarchy, scared witless by the massive support in the polls for LIBRE compared to their candidates, have engaged in a desperate, last minute revision to the existing law which would allow for a second election round, if the winning candidate fails to receive 50% of the votes cast. This would allow for a continuation of the “bipartismo” history of Honduran elections: either the National or the Liberal Parties would be assured of winning. In either case, the real winner is the oligarchy, since both discredited political organizations are different wings of the same vulture.

The actions of the oligarchy are prompted by fear, and as is often the case, actions taken out of fear are rash, ill-conceived and with huge unintended consequences. Over the past year, the monthly Ipsos polling results for LIBRE have climbed ever higher. LIBRE, with its candidate Xiomara Castro, with 28 percent of voter support, now holds a 10 percentage point lead over the candidate of the oligarchy’s National party, and an 18 point bulge over the oligarchy’s Liberal party. This lead in the polls must be taken in context as well: many poor urban but especially rural Hondurans without access to communication services are never counted in polling data, thereby skewing the class content of the polling results.

A Head-On Confrontation is Beginning
LIBRE, its Presidential candidate, and its co-ordinator, former president Mel Zelaya, have called for mass action to stop the passage of the new Electoral Law. They have labelled the new law illegitimate and a fraud, and have declared that should the new law pass, they will not respect it and will proceed as if the former law is in place.  “You can not change the rules of the game, just before the game begins”, said Castro speaking to the thousand gathered in front of the National Assembly. The implications of this position is obvious, and one which might give some of the more sane members of the oligarchy some pause. 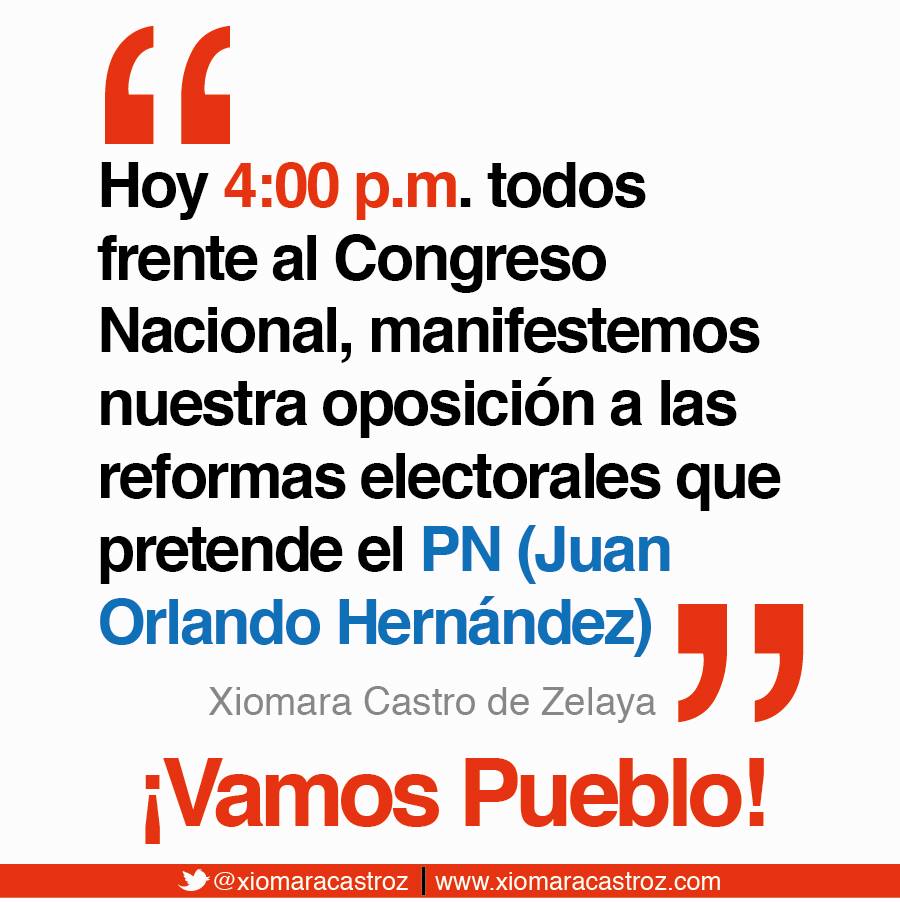 The manoeuvres by the Honduran elite have not been undertaken without planning, however. Several months before, the National Assembly in effect fired the Supreme Court justices, and replaced them with more compliant legal minds. Knowing that a court challenge to the new Electoral Law was inevitable, the oligarchy and its political mentors from the US Embassy wished to ensure a stacked deck to legitimize any new Electoral regime. But this is a very dangerous game for them to play.

Honduras has possibly the most politically- and class-conscious mass social movements in Latin America, with perhaps the exception of Venezuela. This is a movement that has struggled against repression, targeted assassinations, military coups and foreign interventions. It has created a broad, inclusive and non-sectarian national front of popular resistance to struggle against the civil-military dictatorship of Porfio Lobo. It has created a political organization which, despite containing five distinct political tendencies which compete for representative positions within the neighbourhoods and popular sectors, is a mass party of the workers, the youth, the rural campesinos (peasants) and broad sectors of the intellectuals, students and middle class layers.

The LIBRE has the political credibility to complete the de-legitimization process, and it has the capacity to do so. With a victory for the social movements and the broad and revolutionary left within reach, this new attempt by the oligarchy and its US imperialist masters to steal that popular victory is setting the stage for a revolutionary upsurge of the mass social movements, unleashing a dynamic engulfing not only Honduras, but all of  Central America as well, not least of all a further impetus to the mass struggle in Nicaragua against US imperialism, and against its still active oligarchy.

The Honduran oligarchy is playing with fire, and they shall be burnt, and badly so. So we can hope.

Journalist and political analyst Elena Zeledon is a long time militant in the Fourth International, based in Costa Rica, Central America.